Beginner Course Day 4 - Practicing D and A Together | ChordBank

Practicing D and A Together

OK, you've been practicing your chords on their own. You've learned two. Let's put them together.

1 Moving between D and A — Easy

OK, let's practice a modified version of that on / off drill.

But instead of just picking your fingers up in one shape, you'll be moving between the D and the A chord.

2 Moving between D and A — Intermediate

The next drill—this one is a little trickier.

We are going to move between our D chord and our A chord. But. No stopping.

This is really difficult, and will take some practice.

Today, you're going to spend 8 minutes practicing on your own.

First, take out your phone. Set your timer for four minutes.

Now, we're going to try to do the same thing without stopping.

Take out your phone, and reset the timer for four minutes.

In our next lesson, we'll keep practicing moving between chords, and learn a new strum pattern. 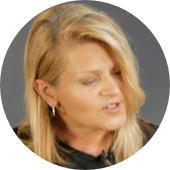 Anna Freitas holds a B.A. from Berklee College of Music  and performs throughout New England as a guitarist and vocalist. She continues to teach students, both in-person  and online via Skype.